When you are building a quadcopter, the flight controller you select is important because it will be the “brains” of your machine.

Note: My focus will be on flight controllers suitable for racing/acrobatic mini and micro quadcopters. If you want to build a large aerial photography quadcopter or hexacopter, there are other flight controllers for that which are out of the scope of this post. You could technically use these controllers, but there are better options too.

A quick primer on what the flight controller does

Quadcopters by nature are not that stable. You have four blades, two spinning in one direction, and two spinning in the opposite direction. All four blades will provide lift, but each will exert torque on the other – so 4 blades end up canceling the torque out, and you have a machine that goes up straight and maintains it’s orientation.

Of course, it’s not that simple(it never is, is it!)

In the air, your quadcopter is subjected to so many different forces. There will be the force of the air that your quadcopter itself is pushing through its propellers, and the wind, air pressure, and weather conditions will all make a difference.

On top of that, you are giving your own inputs through the sticks.

This is a lot of information, and the gyroscope and accelerometer on your flight controller are constantly sending data they receive from these disturbances(and changes in the quadcopter’s position) to the main processing chip, which in turns sends commands to the motors through your ESCs to either increase or decrease speed.

Through this entire loop, the flight controller manages to keep your quadcopter stable.

In the early days of the hobby, flight controller hardware was OK, and the software was not taking full advantage of the capabilities. As a result, every quadcopter had to go through quite a lot of tuning to make sure the flight controller was sending the correct commands to the motors.

Right now, Betaflight is so awesome that your quadcopter will fly pretty darn well without much tuning at all. In fact, the trend seems to be now that flight controllers let you get immediately in the air and flying smoothly. Very minimal tuning is now required – for tuning Betaflight 3.1 and higher, check out this post here.

I have builds that use both Betaflight and Raceflight and I have found both to be fun to fly and very smooth, and flight characteristics are quite similar. Raceflight is easier to set up and get going right out of the box, though, as the set up wizard is quite intuitive and foolproof.

You can make mistakes setting up Betaflight as you have to do everything manually.

I think however that the one edge Betaflight has over Raceflight so far is the AWESOME Betaflight OSD.

Check out our guide to setting up Betaflight

Check out our guide to setting up Raceflight

Check out our guide to setting up iNavflight

The Betaflight(and now Raceflight) OSD makes configuring basic settings on your quad so much easier – it’s insane! You can tune PIDs, change VTx settings, change your rates, adjust your filters, and switch profiles – all from the OSD menu.

Flight controllers have a main processing chip(STM32) that crunches all the data. These chips have specs such as F1, F3, F4, and F7. The number indicates the processing power the chip is capable of.

F3 processors have the same speed as F1 processors, but they have greater memory(more space to store the firmware code) and are able to support one extra UART.

F3 used to be the most popular processor on the market, but with new features like the Dynamic Filter on Betaflight, you need the bigger F4 chip to handle it.

In F3 boards, you’ll have 3 UARTs – one UART will be used by the serial receiver(SBUS/DSM), leaving two more for any other peripherals like TBS Smart Audio, Runcam Split, GPS, or bluetooth.

For racing quads, you just need two free UARTs – one for your receiver and one for Smart Audio if you choose to use it.

Some flight controllers have the PDB and/or current sensor built into them. This makes the build much cleaner, and being able to see how much current you are drawing from your battery is a great way to monitor when to land.

Personally, I am not a big fan of the FC/ESC combo because it’s far too easy to screw up an ESC and having to throw out the whole board. It’s better to keep the parts as separate as possible if you have the room for it in your build, as it will make repairing much easier.

Most quadcopter flight controllers are 36 mm x 36 mm with mounting holes at 30.5mm. This is the industry standard right now, and frames are usually designed with this in mind.

Micro builds use the smaller 20×20 mounting hole pattern, so bear that in mind when you are getting your FC!

So which flight controller should I choose?

Honestly, there are SO many flight controllers out there that it’s kind of overwhelming to choose. Personally, I prefer the CLRacing F4S on my builds, as it’s ideal for Betaflight and has a decent layout.

However, I’ve recently discovered the CL Racing F4 and it seems to be a better option than the Omnibus, which is why I’ve given it preference over the Omnibus in this list. The CL Racing F4S is a cheap, good quality flight controller with a PDB built in that can sense current and is compatible with the Betaflight OSD.

Since it’s a PDB and FC combo, that’s one less thing to have in your flight controller stack, and you can use it for lower profile builds.

It can support most of the common things you’d connect via UARTs(SBUS, Smart Audio, Bluetooth), and has an SD card reader built in for Blackbox recording. Since the PDB is built in, there are also voltage regulators and 5V outputs for your receiver, and 9 V filtered output for FPV cameras and video transmitters.

For the price, it’s a steal.

Best all around flight controller for Betaflight: Betaflight F4 If you are looking for something a bit more higher end than the CL Racing F4, and something that was designed specifically to make the best of all of Betaflight’s features, then you have to get the Betaflight F4 flight controller from FPV Model.

It’s a typical FC/PDB combo, except it has solder pads for ESC telemetry(so you can get individual data like RPM, current drawn, temperature, etc), and it has a current sensor that is rated for 120 amps.

A nice improvement in the Betaflight F4 over the older Betaflight F3 is that in the older board, to power the receiver, you had to jumper two annoying little solder pads to set either 5V for SBUS receivers or 3.3V for Spektrum receivers. Now, there are two separate sets of pads for Spektrum and SBUS, so no more little jumpers to solder up. 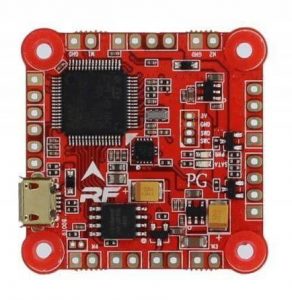 The RaceFlight Revolt is Raceflight’s flagship flight controller. It’s optimized and designed around Raceflight, and the solder pad layout is very user friendly so you’ll get a nice clean build.

It’s an F4 board with 3 UARTs that can support Smart Audio and SBUS together, and you can use telemetry on a compatible receiver to change PIDs and video transmitter settings using the Raceflight LUA script.

The board comes with rubber vibration damping rings, which is a nice touch. You’ll just have to use spacers instead of standoffs to install the board, since there won’t be enough room after the dampeners to put a nut on the threads. Instead, use spacers, line up the holes with the holes in the flight controller, and put a screw in downwards.

If you get tired of Raceflight, you can always just flash Betaflight onto the board! The Furious FPV PIKO F4 is an F4 controller with a 20 x 20 mounting hole pattern that will fit on the tiniest of builds. It has all the features you would expect from a Betaflight flight controller, a built-in PDB, and it can stack on top of 20 x 20 4-in-1 ESCs.

If you are using a 4-in-1 ESC, you can plug the ESC wires directly into the connector on the board for a super clean build. If you’re using separate ESCs, then you can solder each ESC to the board individually, too.

The board also has 16MB of flash memory for Blackbox recording, and the PDB is rated up to 100A and can support up to 6S batteries(but for a micro build, that’s just showing off!)

These are just some of the many boards available – but these are in my opinion the best of the best. There are plenty of clones and plenty of other boards that I’ve not mentioned, but if you stick to any of these, you’ll have a well-performing quadcopter.